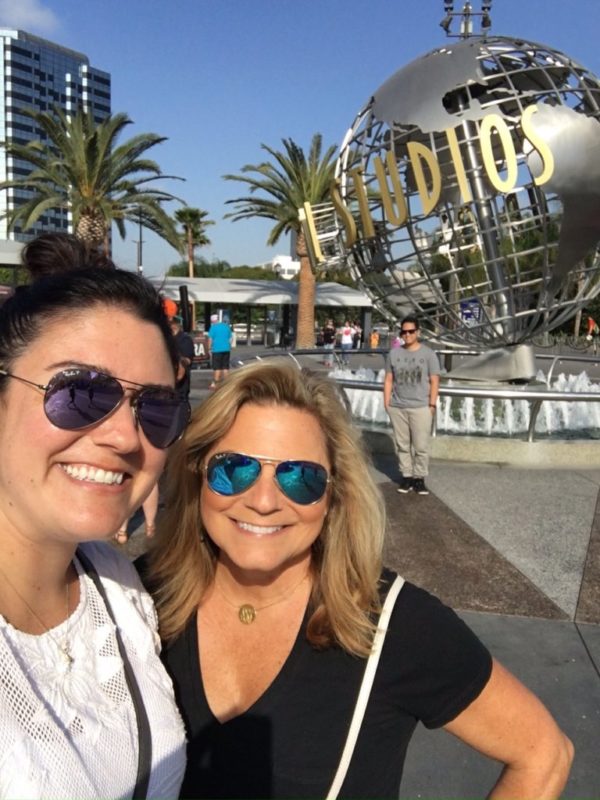 Harry Potter at Universal Studios, a splendid adventure for the young at heart! 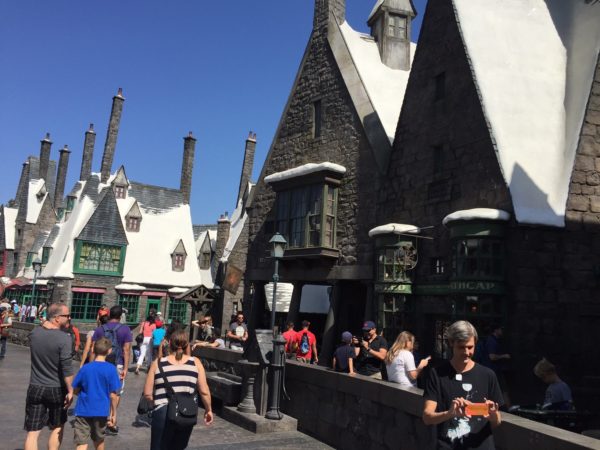 The Wizarding World of Harry Potter opened just a few months ago at Universal Studios Hollywood. I haven’t been to Universal since Alex was a young teen. I can’t even remember the day, she said we went for a birthday party.

Now that my children are grown, I don’t go to amusement parks anymore like we did years ago. Visiting Disneyland or Universal Studios is just not the same for me as an empty nester. We owned season passes to Anaheim Disneyland for years when the kids were little and we certainly had tons of fun and got our money’s worth.

However, never say never… All of the clever marketing and enticing creativity for this new attraction intrigued us both and we knew we just had to see this magical world for ourselves. Because… Alex and I are HUGE fans of Harry Potter and the Sorcerer’s Stone and every single book thereafter, as well as the movies. This new $500 Million “Potterverse” at Universal Studios Hollywood is impressive and over-the top magnificent!

I must say however, if you are not enamored with Harry, Hermoine, Hogwarts and all of the unique characteristics and cleverness of J.K. Rowling and her spectacular imagination, the experience may be lost on you. You just wont get it. You can try though!

Alex and I paid a little extra and purchased a ticket to get in to the park an hour earlier than the park opens. Great idea. The parking lot was empty and Universal Studios was pretty quiet, but not for long…

We dashed as quickly as we could over to the wonderful world of Harry Potter.

“From magical spells to magical creatures, from dark villains to daring heroes, it’s all here at The Wizarding World of Harry Potter”

We were absolutely in awe. The recreation of Hogsmeade is mind-boggling with clever shops and shopkeepers dressed in robes, holding owls and wands. The brick chimneys are leaning and bending above the mythical little snow-topped town. A-mazing!

My heart is skipping quickly as I write, this was truly a one of a kind experience, I think I felt like I was a teen again. My advice is to dive in and enjoy the experience, take a selfie or five, study the architectural details, listen to the music, immerse yourself into the enchanting, all-wizarding village of Brittain.

I don’t want to give too much away and thoroughly encourage you to quickly get on a plane or a train or in the car and go, but here are a few of our favorite aspects of this magical (pun intended) amusement park.

Butterbeer~ Are you kidding? Did you ever think you would get to taste it? It is buttery yumminess that tastes of shortbread and butterscotch! There are two kinds to choose from; regular and frozen – Get the frozen! It is fairly rich so you could probably share one with a friend. We LOVED it!

Honeydukes~ The cutest little candy store in the world. Bright pink and turquoise, stripes and solids with colorful confections sprinkled with a little magic. So lively and clever! 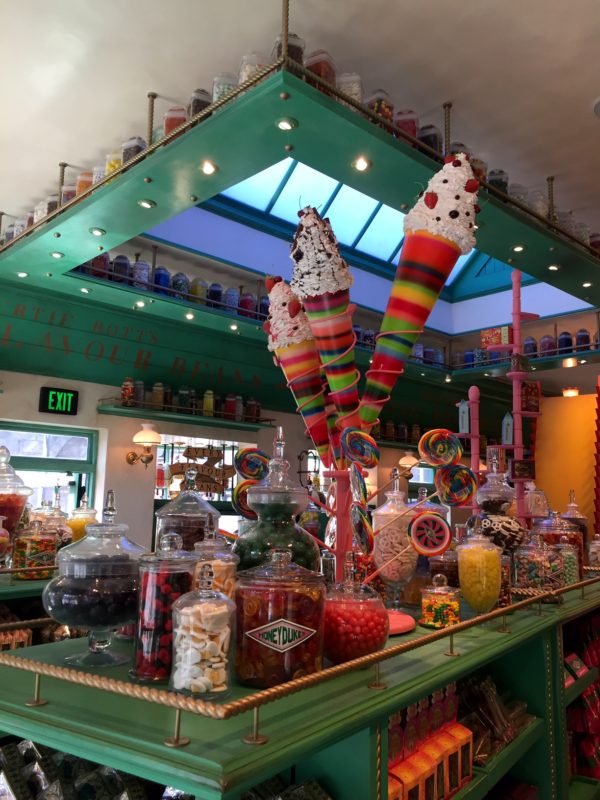 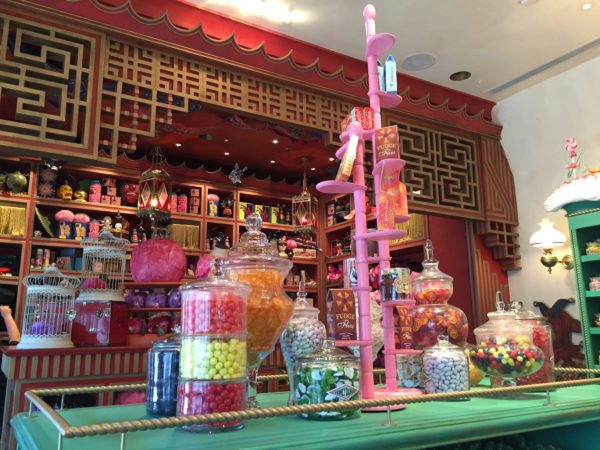 Olivanders~ Makers of fine wands since 382! You step into a small, dark, room stacked floor to ceiling with potential wand choices. There is a shopkeeper who helps one lucky visitor to pick their perfect wand, but remember “You don’t pick the wand, the wand picks you!” 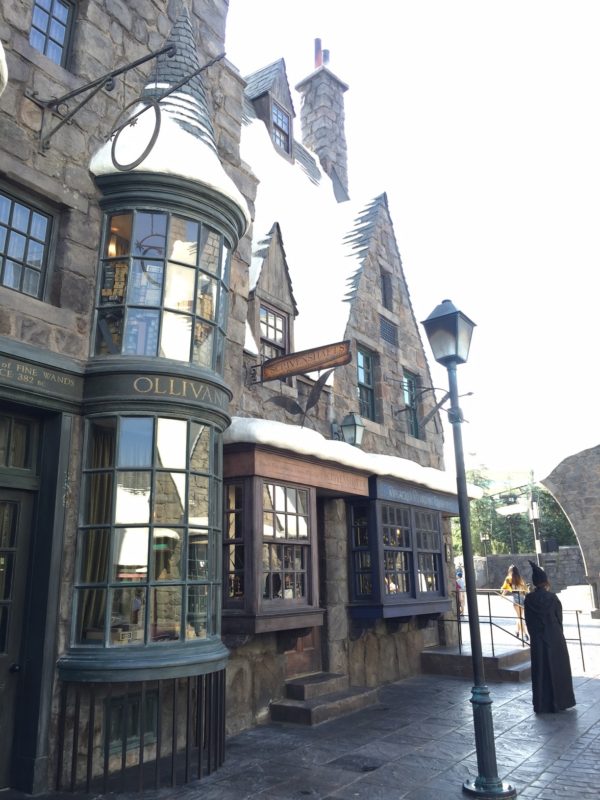 Lucky for us, there was an adorable boy about eight years old in our group who was chosen to find his perfect wand. His eyes were as big as saucers and his grin so big it nearly touched his ears. Alex and I got such a kick out of watching the youngster. I was able to snap a quick photo without causing too much distraction.

The Owl Post ~ You can pick out your favorite quill and stationary or buy a stuffed owl in this charming little shop! 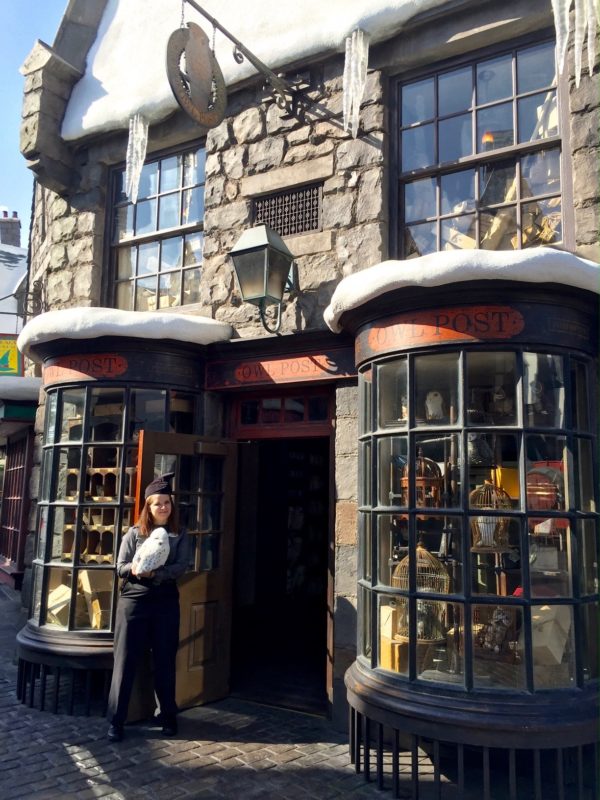 The Very Best Part of the Adventure!

Harry Potter and the Forbidden Journey ~ Unfortunately, I am motion challenged and cannot get on to rides that will make me dizzy, so these tidbits come directly from Alex! Because she had to hold on most of the time, no photos were possible!

With a mix of 3-D technology and flight simulation, you virtually soar over the castle and are greeted by a ferocious dragon, but then you will meet up with him again where he breathes actual fire! This tour of Hogwarts offers a quidditch match and some unexpected and scary visitors too (Can you say Dementor!)

Without giving away too many details Alex feels that “It is unlike any ride experience she has ever encountered.” Her favorite amusement park ride…EVER! The combination of new technology and old school animatronics gives the audience a thrill of which there is no equal!

I have only shared a small portion of the goodness you will experience when you visit! If you are a passionate Harry Potter-file, enjoy creativity and youthful adventures, be prepared to fall in love with The Wizarding World of Harry Potter like Alex and I did.

Have you been? Are you planning to go?

4 thoughts on “A Magical Harry Potter at Universal Studios Adventure!”