Recently my friend Nicole posted glorious photos from her recent trip to Curacao and that triggered my special memories from our trip!

Yes, there is a country named Curacao besides the turquoise blue liqueur of the same name! So many people had no idea where we were going when we told them, so it quickly became a helpful geography lesson. In case you don’t know…  Curaçao is an island in the southern Caribbean Sea, off the Venezuelan coast, that forms part of the Dutch Caribbean.

As the Curacao Tourism Board so accurately describes: “Imagine an island where hidden coves reveal an emerald blue sea. Where arcs of golden sand beaches stretch out beneath vibrant, multicolor sunsets. Where a rich historical heritage meets Carribean vitality. Where the only thing you need to worry about is deciding how to spend your next day in paradise.”

Curacao was truly a technicolor dream destination. We spent time relaxing on the pristine beaches, discovering the charming and colorful capital called Willemstad, but my favorite surprise of the trip was visiting The Curacao Ostrich Farm. Yes I am serious! An ostrich farm on the  spectacularly beautiful island of Curacao. They seem a bit incongruous don’t they? Before our trip to the Curacao Ostrich Farm, I knew very little about the African ostrich, but now… I can dazzle you with a few fascinating details!

We were visiting in July, and the heat and humidity was unfortunately at its peak. Additionally, although we were riding in a tarp covered military vehicle, we were still exposed to the very dusty and dry farm. The terrain was rugged and the ride was bumpy and I half expected Indiana Jones to show up with an enormous rock rolling right behind him!

Riding in the camouflage painted military vehicle provided us with a great vantage point. We were sitting up high enough to have a wonderful perspective of the farm, but close enough to be a able to see the birds blink! The guide drove us around in a wide circle of the farm for about 45 minutes, showing us different aged birds and explaining how they were kept apart from each other. When the baby chicks were only a few weeks old, they were kept inside a small building, then they moved them to a particular cemented “pen” away from any of the other older birds. Then when they grew into “juveniles” they moved to the next pen. Finally, fully grown birds were placed in large corrals living with other adult ostriches.

We were  only allowed out of the truck just once for the unique opportunity to hand feed an ostrich. My husband the animal lover… (NOT) wasn’t sure he would participate in this activity. We were told to hold out our hands flat, with handfuls of the food and face away from the bird. I ended up just holding the dish of food and they ate from that. As you can see from the photos, we were startled and amazed at the opportunity to be so close and to interact with the ostriches. Although Craig was initially hesitant, he ultimately really enjoyed the experience. It was easily over 100 degrees, sun blazing, sweat dripping, dust blowing, but we had a fantastic time!

Here is a little ostrich trivia!

Ostriches are native to Africa, but now they are widely distributed to other continents. The ostrich is farmed around the world, particularly for its feathers, which are decorative and are also used as feather dusters. Its skin is used for leather products (sad but true) and its meat is marketed commercially (we would have never considered eating them!). They are flightless birds from a group called ratites. Other members include; the emus, rheas, cassowaries and kiwis. Just to give you a comparison, the ostrich can grow as tall as 8 feet and an emu (native to Australia) only reaches about 6 feet. These African birds were quirky, funny and at times a bit animated.  They are unique, territorial, have a mighty kick, and can run over 40 miles per hour!

You know the story about how the ostrich supposedly puts its head in the sand when he or she is scared? Not true according to our guide! He said that they may well be listening intently for sounds of their enemies approaching. They do however dig holes in the sand for their eggs, just not for their heads! 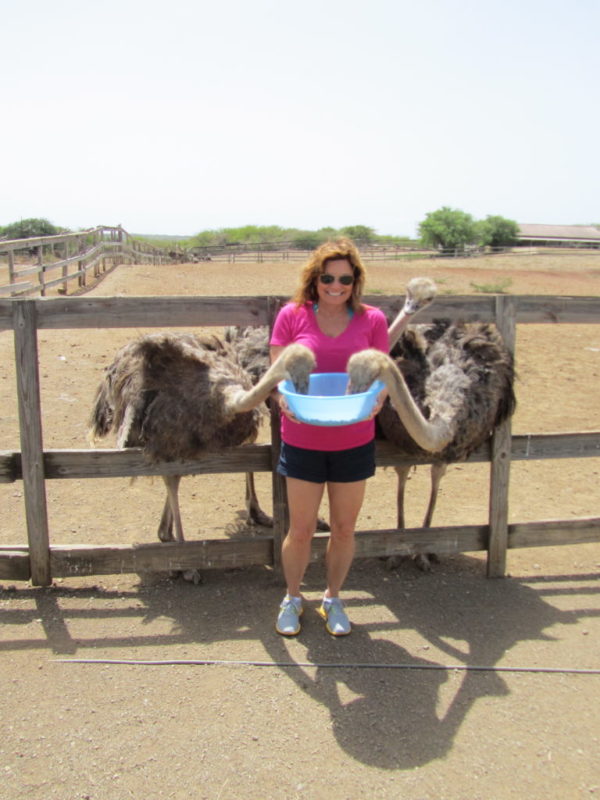 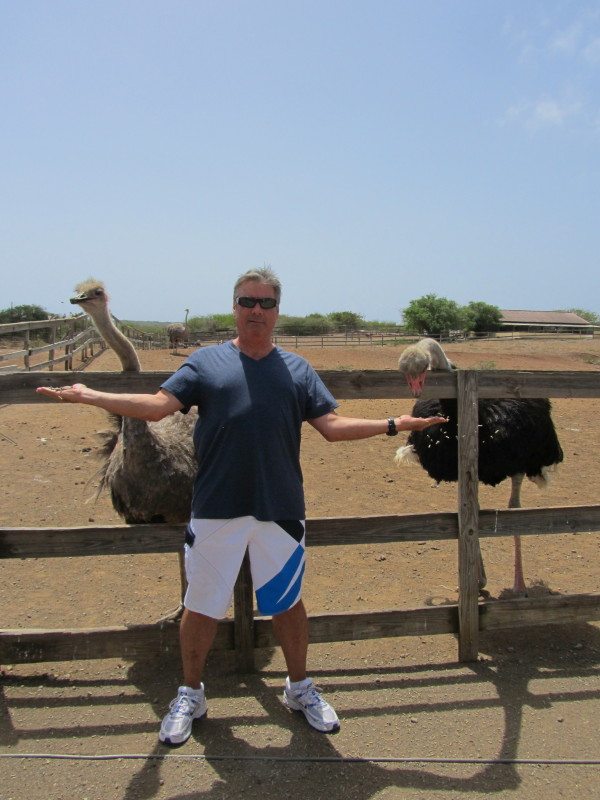 What about the ostrich egg? 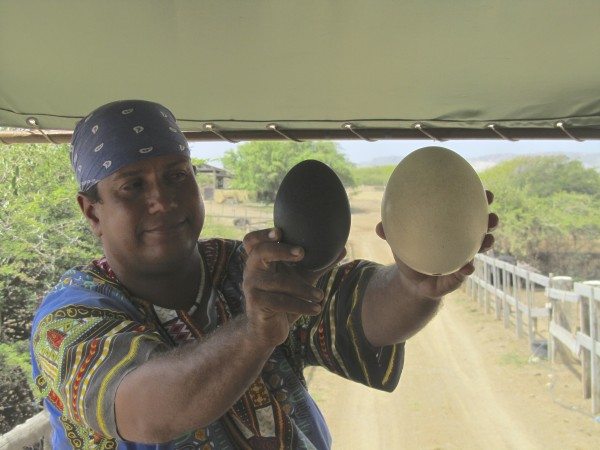 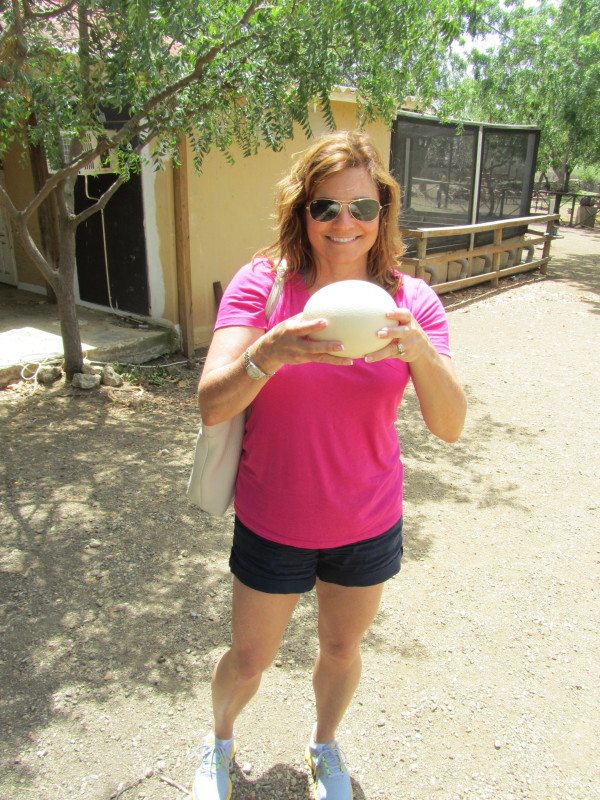 Ostrich eggs are HUGE! They weigh over 3 pounds and are comparable to 24 chicken eggs! Thats a very big omelet!

My “National Geographic” lecture is over, but as an adventure enthusiast, I found learning about these unique creatures so fascinating! Later this week I will share with you about Willemstad‘s colorful colonial architecture which was influenced by the Dutch styles. The buildings are all painted with breathtaking, vibrant colors.