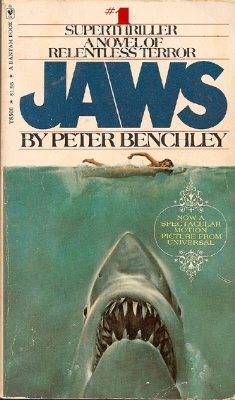 Please welcome our newest Guest Adventurer, Steve Howen, who writes the very clever blog: Tales From An Empty Nest. Steve is married to M’Lissa and has two lovely grown children, Kelsey and Kendall.

Steve will captivate you with his stories. Do you remember when you saw Jaws for the first time? I was in 8th grade – How about you?

Forty years ago this spring, the beach seemed like a great place to my 14-year old male brain. Forty years ago today I would not have gotten into the waves if Cheryl Tiegs was waiting for me. I love the water and I loved Cheryl Tiegs (that year’s SI Swimsuit Edition Cover Model), but Peter Benchley and Steven Spielberg ruined it all. According to the fine folks at the Florida Museum of Natural History, there have been just over a thousand shark attacks in the United States in the past 343 years, which seems like pretty good odds given the risks I am willing to take for a chicken-fried steak. Of course, like Mayor Larry Vaughn in the movie, the researchers may have had ulterior motives in protecting the tourism industry.

Not much has been made of the film’s anniversary and I am not sure why. It is a seminal work in the thriller genre and one of the most popular movies ever made. Adjusted for inflation, Jaws still ranks seventh all time for ticket sales. But good, popular movies are made almost every year; it is the lasting impact of the film that sets Jaws apart. Other than dorky golfers quoting Caddyshack, I can not think of any film that is so strongly connected to an everyday activity decades after its release. And there are a lot more swimmers than duffers.

Don’t believe me? Hum a tune that indicates imminent danger. There is a 100% chance you just repeated John Williams’ haunting and Academy Award-winning score. Tell me how you would kill a shark. There is an almost 100% chance you would use a oxygen tank if one is available, despite the fact that tactic has never worked in real life. The real test though? You are standing chest deep in the waters off Padre Island and something brushes your leg. What is your first thought? You are either agreeing with me or lying to yourself.

Much of the movie’s power derives from the fact that the shark is so seldom seen. Gore and violence on screen have become so commonplace we are desensitized to it. The unknown, however, cannot so easily be dismissed. When the shark did appear, he (or she) was a marvel. Actually, there were three of them, each designed for a different function. The crew called them all “Bruce,” after Spielberg’s lawyer. The shark was an amazing special effect, in contrast to the realism of the rest of the film. Any normal director would have shot the movie in a Hollywood water tank. Spielberg, of course, is no ordinary director and he took everyone to sea.  The result was a sunburned and cranky cast, a production cost more than double its budget and an experience where you never for a moment think you are anywhere but the ocean.

The cast is one for the ages, a testament to the actors’ talent. Richard Dreyfuss (Hooper, the oceanographer) and Robert Shaw (Quint, the crazed shark hunter) were hired a week before shooting began, so they did not have much time to get ready. Roy Schieder (Brody, the landlocked chief of police) had more time to prepare; still my favorite line in the movie  was Schieder’s ad lib of “You’re going to need a bigger boat.” Each character had his own story to tell; that the cast told that story without stepping on each other and in the context of a script that was being rewritten daily demonstrated craftsmanship of the highest order.

Spielberg tied it all together but he was sure the way he handled the budget and the shooting scheduled doomed his chances of ever helming another picture. The exact opposite was true; Jaws announced the arrival of a worthy successor to Alfred Hitchcock. The ultimate perfectionist, Spielberg used $3,000 of his own money to re-shoot one additional scene when the studio thought they had enough. Given his current $3.5 billion dollar net worth, that $3,000 does not seem like much now, but for a 26-year old director with only The Sugarland Express under his belt, it was a pretty gutsy move.

The movie hit me at a perfect time; it is the first adult film I can remember seeing at the theater. Mom picked me and some friends up in the Vista Cruiser from Trinity University, where we had been attending a camp for awkward yet overachieving youth, and dropped us off at the Broadway theater. A week away at co-ed camp, then a movie with skinny dipping and other adult themes? I went in feeling mature enough to forget  that shaving had not been a concern of mine during the week. I slept with the nightlight on. That shark might still be out there.

Make sure you visit Steve at Tales From An Empty Nest, it’s terrific!

Thank you Steve, we look forward to reading more about your empty nest adventures.