This is written by Tam, a returning Guest Adventurer, who writes a fantastic travel blog Travels with Tam. She defines the word adventurer. My “adventures” aren’t even in her league and that is the beautiful thing about having other contributors. We ALL get to experience this incredible story vicariously through a real person, not on television, but directly from a wife and mom who likes adventure and wrote her story for us. So amazing! Ridiculously cool. My cool factor went up just because I know her!

An Empty Nester’s encounter with a great white shark.

Are you kidding me? I thought only people on Shark Week could do that. This is the true story shared by a real empty nest adventurer. 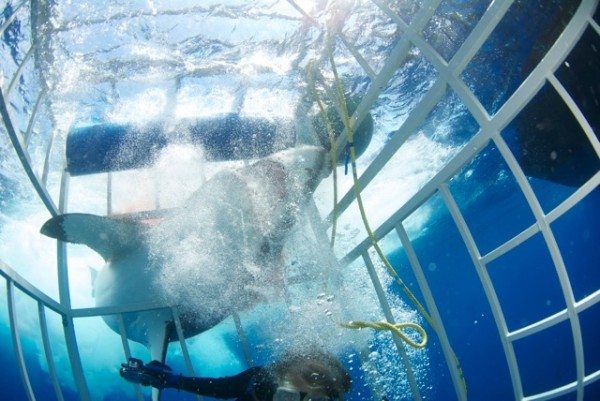 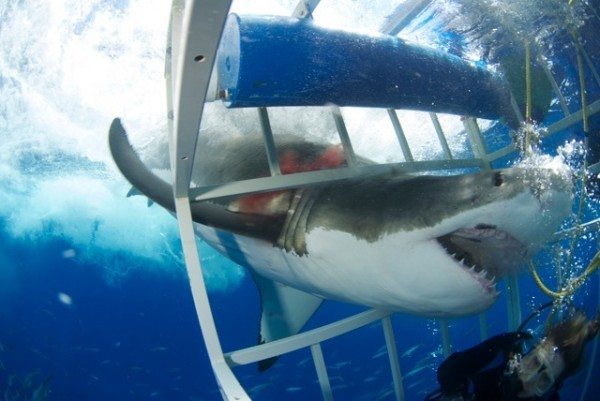 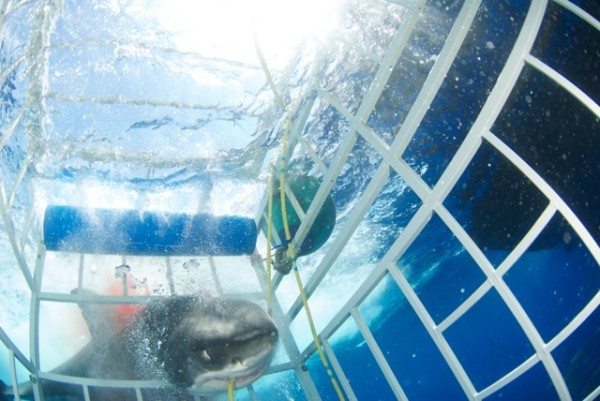 The story from Tam:

I am often told how adventurous, crazy or “brave” I am, or that I am a major risk taker. Well, that’s sort of flattering, but I have to tell you that it is really not the case. I do take calculated risks, and participate in activities that may seem risky, but I make sure all precautions are taken. More people are killed in car accidents than in “adventure sports” accidents. I love nature, I love diving, but I am not reckless, far from it. My husband, Randy, and I took our young adult children, Wes and Ally, on our dream trip to Guadalupe Island to cage dive with Great White Sharks, and we could not wait to get on the boat and into the water!

Before you begin to think I am the world’s most irresponsible mom, you should know that Great White Sharks do not “prey” on humans. Seriously! Of the 33 or so Great White bites a year, most of them are “sample” bites, most are not fatal. We are the ones killing them in unsustainable numbers. Many divers are animal enthusiasts, and conservationists, and the idea of being in close proximity to these amazing and beautiful apex predators is downright exhilarating.

So, on the last dive of our 6 day trip, I was in one of the cages with two others. I was taking photos when I noticed that the bait was very close to the cage. I prepared to take an awesome close up! I got more than I bargained for…the shark went for the bait and ended up slamming into the opening of the cage. These cages have an 18 inch opening for photographers (I mean, we have to be able to get our strobes through the bars, you know!) and it was just large enough for the 13 foot Great White to come for a visit…all the way to his pectoral fins! He got stuck, and it felt like an 18 wheeler had slammed into the cage. 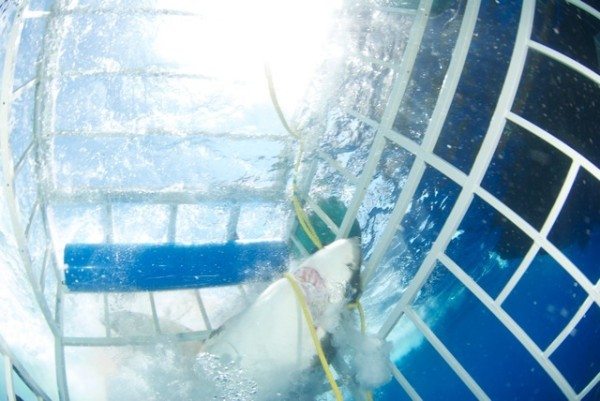 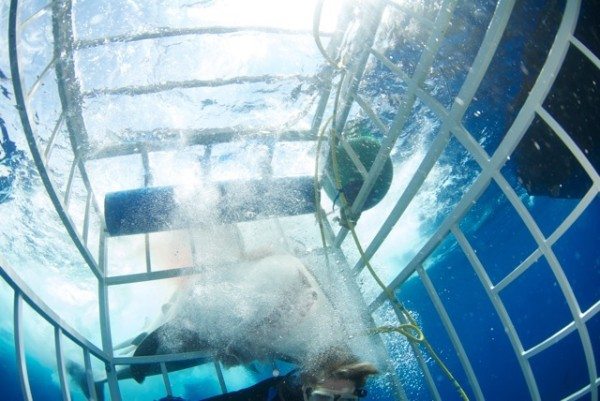 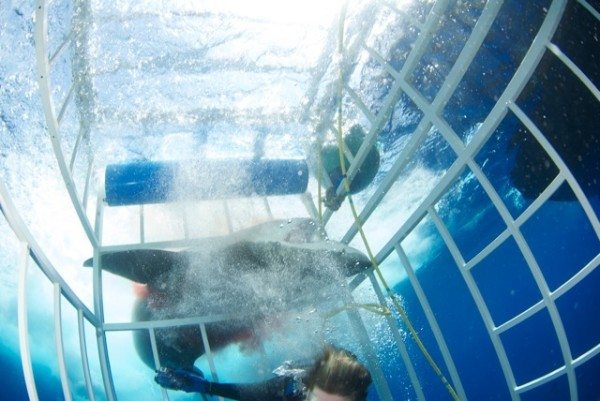 When the shark hit, the young man who was in the middle pulled me back…and believe me, I appreciated it! The shark was panicked and thrashing violently…it felt like being in a big washing machine. I kept trying to hold on to the bottom of the cage, but just could not keep my grip, so I floated up toward the shark. The shark actually did a 360 degree turn in the opening, which caused his gills to bleed. My husband and daughter, watching from above, thought it was my blood, so you can imagine how upset they were, but my daughter who was taking photos kept shooting and caught the entire event from above. What a pro!

After what seemed like an eon the shark managed to free himself and took off, scared to death! While the shark was upside down I received a bump on the head from his snout, and he somehow ended up with my air hose in his mouth, so my air was wet and salty. What an experience! I wouldn’t want to go through it again, but my grandchildren will think I am totally cool (when and if I ever have them). Our trip was fantastic, and we all loved every minute of it.

You know, I guess I could tell a harrowing tale of a Great White Shark “attack”, but it just isn’t true. No shark showed any aggression whatsoever while we were there. Hey, getting in a cage with Great White Sharks swimming around has inherent risk, but no shark at Guadalupe has attacked a human being, and I know people who have been with them outside of the cages, free diving. Would I go cage diving again? Yes, it was a breathtaking experience. I wasn’t hurt, no harm done (except to the poor shark’s gills) and I take full responsibility for being in the cage. I do plan to go again, absolutely. Lightning doesn’t strike twice, right?

Tam Warner Minton is an enthusiastic, boomer adventurer who loves to scuba dive, travel, and explore the world. For Tam, the unexpected is usually the norm! You can find her travels and life journeys at www.travelswithtam.com.

2 thoughts on “My Close Encounter with a Great White Shark! OMG!”