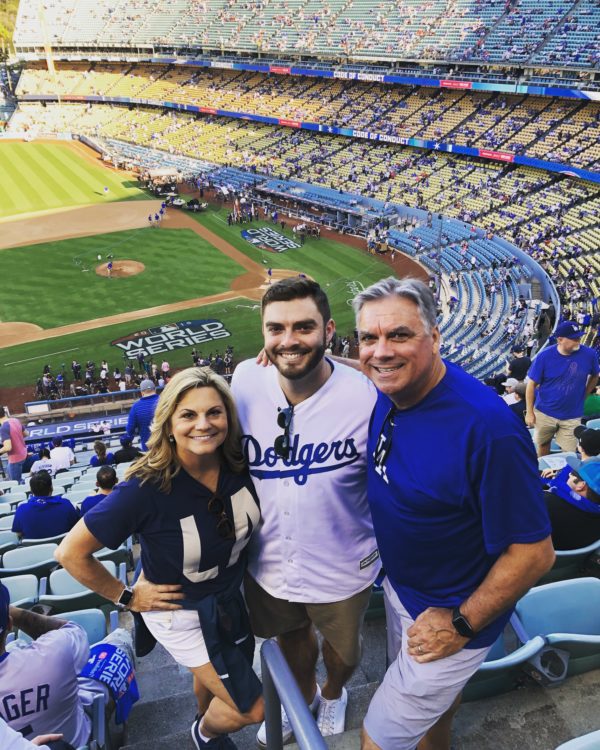 Let me first say congratulations to the Boston Red Sox. The better team won and if I didn’t love the Dodgers, I would have rooted for the Red Sox. They are an impressive team.

So I survived the longest World Series Game in history. I even left with a smile on my face. It was the single most intense professional sports event I have ever experienced – On television or in person. 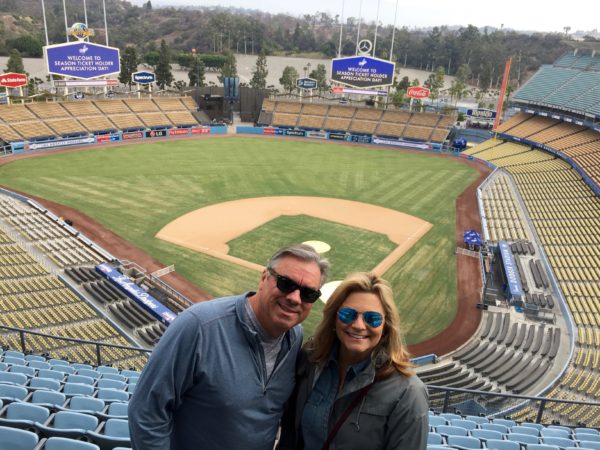 On a rare rainy Sunday in Los Angeles, Craig and I took an insider’s tour of Dodger Stadium. It was an exciting event organized by the UCLA Bruin Alumni and the timing was perfect. We were all licking our wounds from Saturday’s butt-kicking by USC.

It is never a happy day when my Bruins lose a football game to our cross town rivals, but the Trojans certainly and expectedly, outplayed our team. That’s enough of football, so let us switch over to America’s favorite sport, baseball.

Recently, I have written about the Dodgers and our meeting with our beloved Vin Scully, but today we were privileged to receive a fabulous behind the scenes tour of Dodger Stadium. The tour guides enthusiastically showed us all over the stadium, the dugout, the field, the bull pen, the Clubhouse (no photos please) the weight room, the media room, Vin Scully’s Press Box, a luxury suite and we finished by eating a Dodger Dog from the Top Deck. Simply amazing. Two hours of Dodger statistics, trophies and memorabilia was most certainly a little bit of heaven on earth for Craig and I.

Here is what we saw on our tour of Dodger Stadium ~

I wrote the post below almost two months ago when all of the good byes to Vin Scully had not quite started. Since our meeting, the Vin Scully Farewell tour has begun. He has been interviewed, filmed, photographed, hugged, sung to, given the key to Los Angeles, awarded plaques and been surrounded by love from fans, ballplayers, friends and family.

Honestly, I don’t know how he and his wife Sandy have kept up with all of it. Through all of these accolades, Mr Scully just waves it off, “Enough, I am just me” He says.

The Dodgers even clinched the National League West on his very last day announcing at Dodger Stadium. No Hollywood movie could have played this scenario better. It is astounding how spectacular his good byes have been and the amount of cheering and tears that have been shed.

He is the man, no question. I am super sad that we will no longer hear him announcing the Dodger Games. Craig will be in San Francisco today  just to hear Vin call the game with the Giants for his very last time ever. Mr Scully is a legend with a golden voice and a heart of gold that goes with it.

Our love for the Dodgers and Vin Scully ~

Craig was just ten years old when he started listening to Vin Scully. He would put his small transistor radio next to his ear or under his pillow to listen to the Dodger games. It was most likely past his bed time, but he didn’t care, it was baseball season. In 1970, Craig said he became obsessed with the Dodgers and played the “Pop Tart” game. Inside the Pop Tart box was a paper scorecard where he wrote the stats, stayed organized and focused on Dodger Blue.

My grandparents bled Dodger Blue, they were HUGE fans. I can clearly remember them sitting under their backyard willow tree in the summer heat, listening to Vin Scully’s play by play and keeping score. My grandma kept the scorecard on her lap and she would keep score for every game. The summertime in the valley was so hot and they had no air conditioning, so grandpa would bring a cooler of cold drinks and they used that as a side table.

“There’s no cryin’ in baseball” – Tom Hanks’ character in the movie A League of Their Own. This is an updated post I wrote about how much the game of baseball has touched our lives. I am certain you will relate to this on some level. It was published in the Huffington Post as well. Recently we took our …

This post is written by a first time Guest Adventurer, Karen B. and she has created a new category: Grand Empty Nester     Our story is similar Suzanne.  Joe started when Steve was 9 in Little League in Arcadia (back then that was the earliest you could play – no T Ball) and continued …

“There’s no cryin’ in baseball” – Tom Hanks’ character in  A League of Their Own. Here we were, Empty Nesters, with a young puppy standing on the fields where our son had played baseball until high school. I was moved by the realization that we were now the spectators. I saw my devoted baseball husband standing …

When our son left for U of AZ, it was both sad and a relief. We had struggled with his attitude for the last two years of high school and welcomed our newfound freedom. However, after a month at UofA, our son contracted mononucleosis. Since he hadn’t been sick more than a few days his …